I have made a lot of progress on the game so far. The first thing I did was add a script that follows the player and also opened up the area so there is space to walk. Next I added a new enemy type that gives more points when destroyed. After some thought I decided the next course I should take is ammo and health drops.

The random loot drop script works with two different “if” statements that first ask the question of if loot will drop (60% chance) and if it does will decide which piece of loot will drop between the ammo and the health. The health drop has a 40% chance of dropping and the ammo has a 60% chance.

Next up on my list to do will be a new weapon type and also ammo clips so that the player has to reload, thus adding more challenge to the game. From there I am setting my sights on a menu system.

Next on the list after giving myself an ammo limit was to create an ammo pickup so I could replenish what I used. I think it has come together quite nicely. Basically when the player steps into the pink ammo blob it will run a script that calculates how much ammo the player currently has and adds 30 to it. I think next on my list will be ammo drops from enemies or even starting to figure out the menu systems and a way to die and restart the game.

*Side Note* I got caught up in the moment and tried to get away from the bad guys in the video, it actually worked! After escaping I remembered I didn’t give myself a chance to get any more ammo so I just made myself get obliterated by the wall, I will avenge myself in the future.

Next up on my agenda was to come up with a way to limit the amount of ammo the player has and a visual way for the player to track how much they have remaining. I basically wrapped the “if” statement that instantiates the bullet with another “if” statement that checks to make sure the player doesn’t have 0 (zero) ammo and if they do then no bullets will ever be created because of the else clause. In the future I will add ammo drops and the ability to reload but for now I am good with the one amount of ammo. 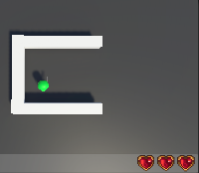 I quickly put together a visible health system so the player could see how much health they have remaining. It will definitely change throughout this build but I think hearts has that certain retro flare to them. 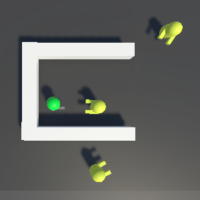 After a few hours of research I found out how to implement pathfinding for the enemies. I added a wall to see if the enemies would go around it, the results were much better than I expected.

Work had began on a new project that is a top-down survival shooter. The project is in the bare bones framework stage but I thought uploading the progress of the game would be  good thing. Here is a short clip of The damage system being implemented and tinkered with.